Mospick Halt came about because I was not making much progress on Chorminster. It was taking me a long time to build engines. I have had two attempts and while neither have failed, none have then actually worked. I get stuck when dealing with wheels and quartering.

I decided I needed to do something different so I set myself a budget and a timescale and decided to create a layout to OO9 standards. the only standard about OO9 is that it is 4mm to the foot and that the track gauge is 9mm.

I decided it should be compact and self contained so I settled for a rough dimension of 4' by 2'. As a result of my decision to do this 'quickie' the Chairman of Oxford club decided this would be a good idea for the club and set the Chairman's Challenge for 2007 to be to produce a layout within 8 square feet ready to exhibit in 2008. The result is several layouts that will all be able to be seen at Oxford Club Exhibition at Witney.

In wanting to build a layout more quickly than I was managing in 3mm, I realised that the layout would need an element of ready to run. Choosing OO9 meant that there were plenty of chassis available with a large supply of body kits or even the option of freelance locos. Joining the OO9 Society is a must as they have  a significant amount of literature, an excellent website and a monthly magazine. There is also a thriving internet group.

I debated several styles of layout but eventually was left with just the one criteria that I should be able to watch trains run on this layout. This meant that there needed to be a loop at the front and a siding or two to give interest plus a fiddle yard.

On a practical level, my experience with Chertonwell led me to want to build a layout that was self contained. Chertonwell is great but it does need to be set up on trestles which need aligning and storing. Essentially I wanted as much as possible to be built into the structure of the railway to eliminate lots of extra boxes.

After much deliberation I have decided to call the layout Mospick Halt. The reason was I could think of nothing else and I was under pressure to choose a name for exhibition publicity.

With the basic size of 4' by 2' determined for me I decided to create box section that was slightly different from normal. The sides of the layout were formed from 9mm ply. The front and back pieces are a traditional 4" depth. However, the sides are 12" tall. The idea here was that the back scene would fold round onto these sides and their strength would protect it.

The corners of the layout were braced with 2" x 2" timber.  This was both screwed and glued to give real strength. I then made the legs out of timber in the garage. The legs are simply two lengths of timber connected together by a flat of 9mm ply. The tops are rounded and drilled to accept coach bolts that are screwed into the corner pieces. As the top of coach bolts are threadless the legs swing down well. All the holes were drilled very tight so there is little play.

Two diagonals are fitted for bracing. The legs then fold up and more coach bolts are used to secure them in transit. The legs are different widths so they fold up inside each other. This is achieved by using a second pair of corner blocks at one end. There are fittings on the back of the layout to attach the coach bolts so they do not get lost when the layout is erected. In order to accommodate the legs within the lower half of the baseboard, the cross pieces are 2" x 1" softwood, screwed and glued to give strength.

The next stage is to start putting the track down.

The track is normal Peco OO9 Crazy Track. It's simple to use and easy to lay down. I first covered the track area with 3mm cork and then laid the track on it. I used as tight a radius as I dared at the ends but I could probably still have managed tighter curves still. One limiting factor was that I had 18" lengths of track and so there was a join on each curve. In order to limit the problems I staggered the track cuts.

The fiddle yard was done the same way as the front of the layout. Fiddle yard designs are a whole subject in themselves. Instead of a passing loop I chose two sidings. This allows me to store an extra train but does mean that the front of the layout has to be used to hold trains while a new one is brought into play. This also gave me a small area that I could use as a control panel.

Using the overriding principle of being self contained I decided that I did not want to have a separate controller that had to be picked up and put down. I also didn't want the traditional pencil and stud operation for the points. I decided to use the products made available by MERG. Using their products I was able to build everything into the layout. The trackwork was sectioned as normal and switches were placed at the rear of the layout. These switches run back to a clock controller that is running in shunting mode. These controllers have been used successfully to run Chertonwell as an automatic layout. I screwed the PCB to blocks under the layout and placed the control knob next to the switches.

Another irritation about operating points is the concept of passing contact switches and momentary operation. What I wanted was to use normal switches. MERG do a point motor board that achieves this. It also has contacts for changing the frogs or signals. Each board  can be used to drive 2 points and 2 frogs or 1 point and multiple contacts. It's a very versatile board so I used 3 to control the  points. Now I just point the switch in the direction I want the train to go and the point goes there and stays.

One other consideration is that it is poor practice to have mains electricity within the baseboard. The MERG boards all work off a range of DC voltages, somewhere between 16V and 22V. Casting around for a power supply I was made aware of the properties of old laptop power supplies. These typically have leads on both ends and provide suitable voltages. The ones I obtained provide 2amps at 20 volts. I got two (one as a spare), cut off the custom connector and fitted banana plugs. Job sorted

Scenery is the most challenging but most fulfilling to get right. My first thought was the backscene. Here I used mounting board that I bent round and glued to the side board and to battens running across the back of the layout. Once this was done the cuts in the back had to made for the trains to go through. I was really tempted to produce my own backscene using a panoramic view of the Cotswolds but winter arrived and the photo opportunity passed. As a result I have opted for the simple route of putting together some Peco backscenes. These are always noticeable as Peco backscenes but hopefully, by the time the layout is done, they will be largely hidden behind other structures.

The ballast and the flock is normal woodland scenics materials. I have placed a pond in the front right corner, made by sculpting out the cork, painting the bottom and adding varnish. The stone walls round the church and at the sides of the layout are made from Das modelling clay. It proved surprisingly easy to roll and to create a wall effect using a shaped piece of plastic plus a couple of small screwdrivers. They are painted with various acrylics. The more realistic one round the church had a dark grey base coat with lighter colours dry brushed on top. 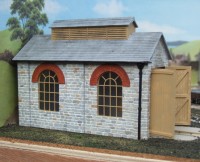 The buildings are largely going to be Wills kits. The first one done is the engine shed. I have used the basic kit but have cut it down in height and length. I also turned it into an L shape with the water tank over the extension at the rear. The water tank is not the one supplied with the kit but the other Wills water tank. The engine shed is removable and sits round a corrugated cardboard floor. I intend to add lighting to the buildings to provide more interest.

The second building done is the church. Most churches were too large for the site I had available and would have dwarfed the layout. Eventually I came across a second hand Dapol kit. this was really quick to put together and was an ideal size. It has been lit from inside and has stained glass windows which are done from images found on the internet and printed on acetate. 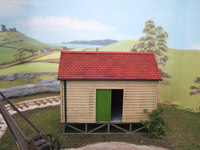 The corner of the goods yard was looking very forlorn. I also needed to hide the gap in the backscene through which the track went. A quick trawl of the internet showed two raised stores, one was from Ratio, the other was from Wills. The Wills kit was available in the local shop so one was bought. IT went together very quickly and just needed a suitable paint job. A technique that I have been experimenting with is to prime the building in black. The idea is that you can then apply thinner top coats and anything that shows through is a darker, rather than lighter colour which is more more appropriate for creating shadows.

The clapboard was painted in LMS Buildings Cream (Precision Paints Enamel). The rest was all done with acrylics. The roof was dry brushed using downwards diagonal strokes. This has kept the red paint away from the crevices leaving patches of darker colour as expected. Unfortunately the camera doesn't manage to pick this out. 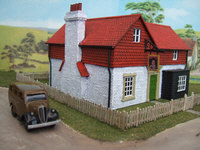 The pub is the Coaching Inn from the Wills Craftsman range of kits. It was way too large for the site I had available so it has been reduced both in size and height. This necessitated some license with the rooflines but the effect has been achieved. Again this model was sprayed black and then dry brush painted, even to the point of painting the bricks terracotta and then whitewashing them afterwards.

Overall the effect is pleasing. It's perhaps a little bright but helps draw the eye to the middle of the layout and away from the curving corners. The sign is the usual computer trickery. It's actually a picture of my wife Jill looking very enigmatic and I called the pub 'Her Indoors' 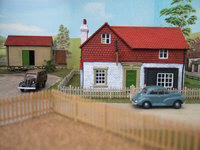 Here is a picture of the two buildings in context looking across from the station platform. A recent purchase of two Classix vehicles has helped to bring some scale to the layout. The pub has been placed inside it's own picket fence (Will, I think) which has been painted a faded brown/grey colour. Unfortunately from this angle the gap in the backscene can be seen between the buildings. I intend to place suitable trees and bushes to hide the worst of the openings.

The station building was goings to be a Wills Craftsman kit but time is running out so the simpler Wills Railway Halt has been used. It's a little lost on the platform but it performs a necessary purpose.

The layout is now sufficiently finished to go to its first exhibition at Witney in May 2008. Here are some pictures of the completed layout. The lighting wasn't great but I wanted to get some current pictures up. 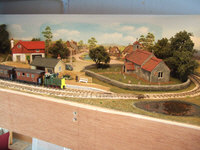 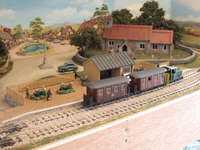 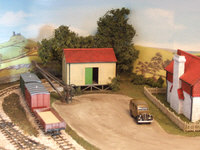 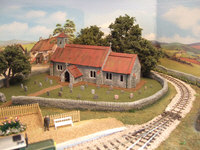